Roy W. Spencer is a principal research scientist at the University of Alabama in Huntsville, where he directs a variety of climate research projects. He received his Ph.D. in meteorology from the University of Wisconsin in 1981 and was formerly a senior scientist for climate studies at NASA. Spencer is the U.S. Science Team Leader for the AMSR-E instrument flying on NASA’s Aqua satellite. He is co-developer of the original satellite method for precise monitoring of global temperatures from Earth-orbiting satellites, for which he was awarded NASA’s Medal for Exceptional Scientific Achievement. He has authored numerous weather and climate research articles in scientific journals and has provided congressional testimony several times on the subject of global warming. Spencer is the author of the New York Times bestseller, Climate Confusion: How Global Warming Hysteria Leads to Bad Science, Pandering Politicians, and Misguided Policies that Hurt the Poor (Encounter Books, 2008).

Click here for more information and presentations by Roy Spencer. 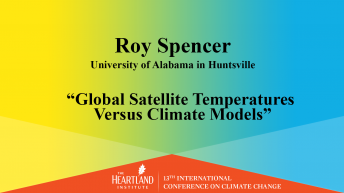 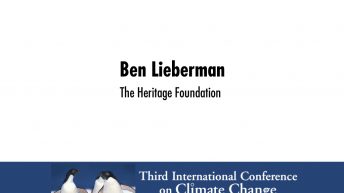 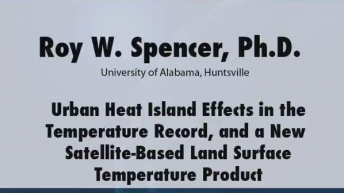